Someday you’ll be minding your own business, out at a show in the drudge of your hometown. You’ll become ensnared in a sonic moment that whisks you away, to somewhere far from the four walls of the venue you’d walked into. Voices and instruments carrying the echo of another latitude roll into town. An artist might envelope you in the spectre of their world with a song and take you to a place hitherto completely outside your personal mise èn scene.

For a peck of audiences in Australia over the past couple of years, Bonnie Stewart has been one of those subtly transcendent artists. Her lilting vocals float over gentle peaks of acoustic and electronic instruments, layered ethereally into what may be a moderately enchanted loop pedal. Under the spell of thrumming guitar, Stewart renders her arrangements with a fidelity of performance that seems to amplify an almost spectral presence. This is Bonniesongs. She’ll play loudly whilst making you ridiculously aware of silence and then go some way to reminding you how music is at its most basic, mere vibration moving through air, occupying the same molecular space as the incorporeal.

After the show, the wormhole closes over. Bonnie is softly spoken, approachable and personable. The woman who bare moments earlier, exuded something supernal onstage, is supremely down-to-earth.

We talk about what brought her to Sydney, how different this place is from her hometown of Dublin, and attempt to approximate an understanding of what gave rise to her uncommon craft. 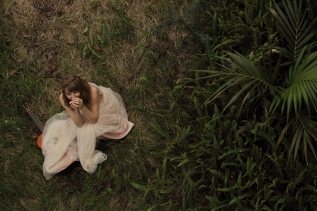 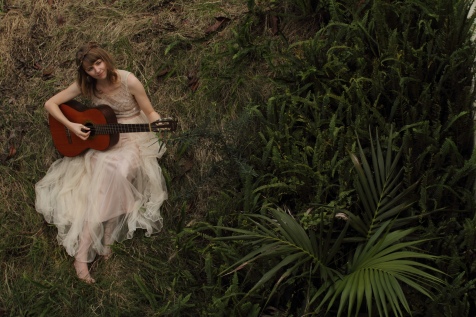 How and when did you start Bonniesongs?

Well, for years I sang and wrote songs alone in my room, mostly recording vocal layers into GarageBand, and couldn’t figure out or imagine it live. I guess “Bonniesongs” started once I began performing, which actually started in a treehouse in Byron Bay. That was soon after I moved to Australia.

I was volunteering at an organic farm and self-sufficient community called Jasper Hall. It was a really inspiring place. Luckily, I had a mandolin with me, and just started writing songs in the mango tree I was living in!

It’d always been a dream of mine to live in a tree. Anyway, I gave the residents a few performances and had a lot of fun. It just continued from there really. I don’t know if I would have had the confidence to start playing in Sydney if it wasn’t for some very encouraging friends though. You gotta have your pushy friends! 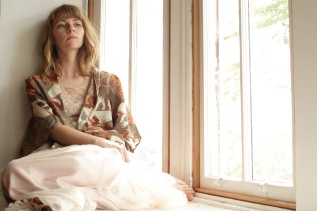 You’d just moved from Dublin to Sydney. What lead you to leave Dublin for Australia?

I’m not totally sure where it began. Maybe it was too much watching Neighbours and Home and Away (she laughs). I just started feeling a pull towards Australia. I became a bit obsessed that the universe was telling me to come here! There were logical reasons, like I love the sun and the lifestyle it brings. There were also more economic opportunities compared to Ireland, and there are some Australian jazz musicians I really enjoy. Ultimately I was looking for a change of scene and an adventure.

I felt in my gut that I needed to come here. I’m a big believer in following instincts. 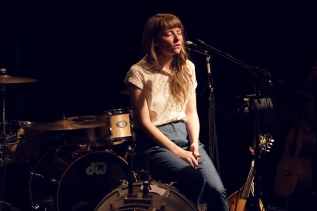 What are some of the differences between Dublin and Sydney, in terms of music and performance?

I think the main differences really come down to performance opportunities and financial support. There are some really creative musicians and interesting sounds coming out of Dublin, but the lack of venues and backing are the biggest problem. There are less and less spaces to play and usually for little or no money. Conversely, I know musicians in Sydney who can make a living playing music, who somehow always find a space to put on original music even if it’s just a warehouse, tiny bar or house. That’s not to say Sydney is full of venues or support for original music. It can be hard for sure. Sydney musicians have to fight to make it work sometimes, which is maybe why there’s such a strong music community here. I hope that Dublin’s creative musicians will make it work too.

I’ve also noticed a variety of instrumentation here in Australia. All these saxophone and trumpet players, and a sousaphone! I’d never seen a sousaphone until I moved here! I think it comes from having more support for music in schools. Primary school kids are playing in jazz bands and that is awesome. I didn’t have music as an option at all in school! That’s just crazy!

Wait… No music in schools?

Well not in my schools. I know of friends who could. I eventually had to take music outside of school. I guess it’s just another example of how music isn’t always recognised as important. Music should be a required component in every school because it’s just SO beneficial for learning and development, and it’s an integral part of life.

At a grassroots level, Sydney entertainment and nightlife have taken a beating at the hands of the state’s inept lockout laws. You’re from Dublin. What would you say to a state that would see its creative communities hamstrung by over-regulation?

Suck a brick, state. Uh too many emotions, I’m not sure where to begin…

A lot of your songs are like little stories. What do you write about? What inspires you to write?

All sorts of things inspire me lyrically.

Musically, I get a lot of inspiration from watching live music. I take mental note of sounds that I like and what seems to work, though most of my songs have come from noodling around on guitar and drums or even just singing around the house. 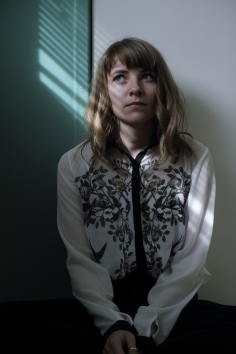 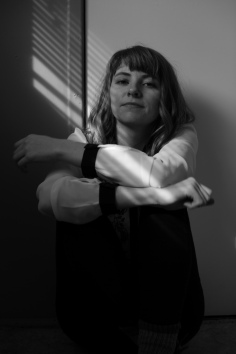 Some of your songs seem to be written about your daily life too.

I definitely end up writing about little things that’ve happened to me or what I’ve been thinking about at the time. I recently watched Night of the Living Dead and pretty quickly wrote a spooky song inspired by that [Barbara]. I need to have a clear idea of what I want to say, otherwise I usually never end up finishing the song. I have a lot of unfinished songs! When I’m feeling inspired and focused, I can write the song quickly, which has probably lead to some of my favourite songs.  Oh, another example is the time my gardening enthusiast housemate pulled up my lavender plant and some herbs which he thought were weeds. It led me to write a song, Flowers in the Garden.

A lot of your songs evoke an almost cinematic sound. Do you have a strong visual in mind when you write your music?

I’m a pretty visual person in general I think, so having an image just helps make things clearer in my mind. My friend Ida Lawrence and I made a stop motion animation video for my song Dinogon, and it’s pretty much exactly what I was visualising as I wrote the song.

I wish I could make animated music videos for all my songs, but it takes me toooo long!

Would you like to see your music on a film or soundtrack?

Yeah. I’ve had a couple of bits of interest in my music being used in films, but it hasn’t followed through yet, unfortunately. I recently played at Kangaroo Valley Folk Festival. A man told me I sounded spooky and would be a perfect on the soundtrack of a scary movie, so I hope that happens. 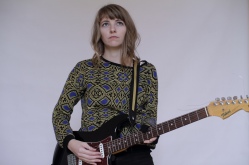 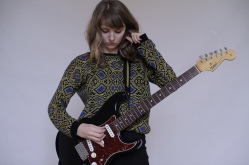 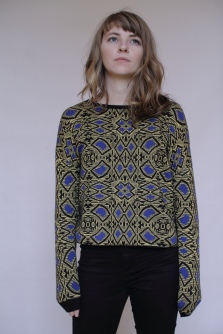 Your dad is a luthier.
What kind of stringed instruments does he mostly make?

Are any of your guitars or other instruments made by him?

My dad has made guitars, mandolins, mandolas, and fiddles. He made me a very special classical guitar, which I love so much. I also have a Les Paul style electric made by him, and a mandola. These beautiful instruments are all safely back in Ireland at the moment, though. I’ve only had the opportunity to perform live with them once, last April in Dublin. Other than that they’ve been relatively unplayed for the last few years. My dad has been too worried about flying with instruments, and how they would react to the change of climate. I think I’m gonna sneak that classical guitar over next visit, though.

I get a sense of depth or ‘tradition’ in your music.

Do you feel like there is something ‘in the blood’ about making music for you?

I always love it when people tell me they can hear the ‘Irishness’ of my music. I’m definitely never trying to make it sound that way. I’d like to think that all the music I’ve ever put a lot of listening time into, comes through or inspires me at some point in my own music making. I always had Irish music around the house, then grew up with punk, grunge, indie and rock. I studied jazz, some Indian Carnatic music and a lot of experimental improvised music along the way and, well I think it comes through at different times. So in a sense, I feel like all the music I’ve ever really connected with has stayed ‘in the blood’ for me. 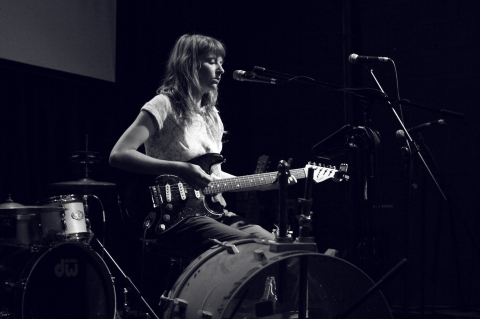 What’s next on the cards for you in terms of tours or releases? Where can we see or hear you play?

Well I have so many songs that I need to get out there, so one of my next goals is to just record everything I’ve written in the last couple years and put it all out. But I wanna keep my favourite songs for a special album release. The album will be called Cat and Mouse. I hope to get it out this year. That’s all I can tell you! For now, you can listen to some tracks, buy my demo or keep up to date with gigs from my website https://bonniesongs.com or  https://www.facebook.com/bonniesongsmusic/

As we went ‘to press’, Bonnie let us know she has a new video to share (just in time for this story)! Thanks to the wonder of YouTube, here it is: