Words and Photos: Reef Gaha | On Location with Barrie Rose in DTLA |

Barrie Rose has been described somewhere as an ingénue.  It’s a pretty, musical word but its definition belies several levels of the skill and sophistication which this LA based musician possesses. Barrie retains the innocence of an ingénue, but adds depth and complexity to that paradigm. In the purest sense of the word, Rose is a chanteuse.

I first became aware of her music during a short residence in LA around 2010. We talked about collaborating on a series of photographs. Time flying over us as it does, I was unable to meet with Barrie until several years later in 2014, when we shot stills of her stretching and frolicking in the undercroft of the (now half demolished) 6th St Bridge in downtown LA.

Perhaps for these reasons, my awareness of Barrie and her music is inextricably linked to Los Angeles as a place. This association is borne out by her long residence in Echo Park, and now Chinatown. When we sit down to talk for this article during September 2016, this sense of the city is one of the first things I mention.

How much a part of your music is your sense of place within LA? Would you say the city is a strong influence?

‘The environment and headspace I’m in when I write a song directly influence it. I write differently when I’m in other places. It’s to do with the energy of the place. The city is a big influence. Usually not over the content of the songs so much, but on how I’m feeling and what phase I’m in.’ Rose mentions one exception to this, her new song Chinatown, an artefact of having recently moved to the downtown neighbourhood.
‘I like fresh spaces and also write a lot when I travel, but I think my best songs still come from Los Angeles. I suppose I‘m trying to be honest about my feelings and situation, so I find the realism of myself according to where I am, literally. I mentioned ‘phases’ earlier. Inspiration comes in phases. That includes the styles I’m drawn to, and who’s close to me at a particular time. That can change every few months. Now I’m really into downtown and the grime and worn out stuff of the city. I feel there is beauty in that.’

Downtown LA is slowly but surely changing. Gentrification and urban renewal is slowly replacing the bricks and grime. What do you think about that?

‘I think as long as it’s done respectfully, being aware and considerate of the environment prior to you coming in (and with regard for the place and its uniqueness and character), and having a deep regard for the people who resided there before you, it’s okay.

That being said, there are so many different aspects of gentrification that deserve consideration within themselves. I can’t really generally say whether it’s good or bad. I mean there are many nuanced facets that I have varying opinions on.

I am also part of it, of course. In Echo Park, I lived in a studio apartment and all the other people in that small building were Mexican families. My rent was super cheap in relation to the norm around the city, and in the last few years it seems like that is harder and harder to find. The fact that Echo Park Lake was recently redone completely and is now a beautiful park as opposed to a smelly, swampy place, is a part of the good side of gentrification. I mean, bringing nice things to a growing community; that part of it I’m in favour of but simultaneously, I am glad to be out of that city just because it doesn’t really inspire me anymore.’ 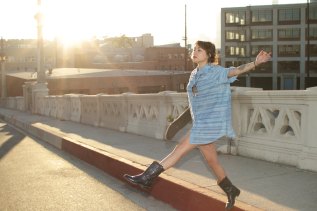 Now that you’ve moved, what are you working on?

‘Different things at the same time. I’m recording new songs. I’m excited about that because I really love the process of recording and just getting to the produced version of a song.

I am also coordinating this really big, fun benefit event at The Smell.’

The Smell is an all-ages, alcohol and drug-free, punk rock/noise/experimental venue in Downtown Los Angeles, recently faced with the threat of closure after being notified that their landlord has plans to demolish the building. Barrie rightly considers this to be an iconic venue.

I ask Barrie more about the benefit.

‘It’s going to have bands of course, but at the same time there’ll be a lot of surprises that you won’t be able to find anywhere else.’ Rose is humble about her involvement. ‘I like the idea that this will be a special, once-in-a-lifetime event that requires a lot of thought and development, but ultimately we’re just creating the experience that can only be had if you’re actually at The Smell. It’s happening on November 5th. ‘

Like the city she inhabits, many of Barrie’s songs are populated by stories. Some are autobiographical while yet more tell the tale of others, seemingly observed through random encounters. I ask Barrie to explain the back story behind a few lines. 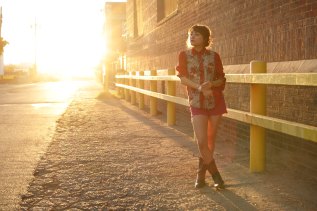 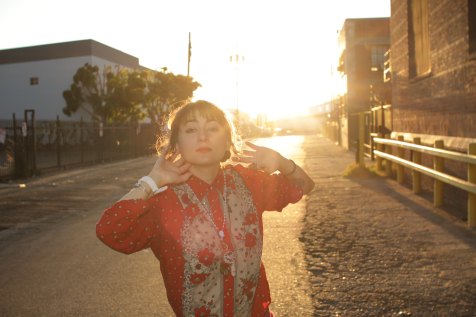 Are there any true life stories behind your songs which are particularly strange?

‘I write what I know, so it’s mostly all reflections on experience or people that have really affected me. Sometimes lyrics come up in my songs and I don’t know what I was referring to until much later, when I make the subconscious connections. There’s this new song with a line that goes ‘I saw the robber and the robber had a gun’ which I had no idea about [at the time of writing].  Later I remembered a time when I was 15 (in my really bad-girl years) where I was drunk and sitting in the back of someone’s car, a friend-of-a-friend I think. I found a gun [in the car] and this person had actually just robbed someone. That scared me. A lot of questionable things have happened in my past and some things are really tucked deeply in there, and it’s only sometimes that memories get triggered.’

Can you tell me about the story of Rocky?

So, she’s a real person that you see around LA?

‘No not exactly. I have met people like that. I mean, I have met Rocky in different forms.’

‘Yeah sure, more of an archetype; an idea and a feeling, or a made up character that might be real.

It might be me. The line ‘Rocky doesn’t know, he wasn’t even born’ sticks with me because it’s also the feeling, ‘what if none of this is real? Why was I born at this time and place?’’

I like the line ‘don’t make a man apologise for everything he lacks’.

‘Yeah, because sometimes you can’t help the person you’ve become. I mean you are a product of your past and what you’ve grown to know. It’s not Rocky’s fault she is the way she is. She was born into a certain body with a certain brain.

One day she just runs away without anything and just leaves home. No purse or any form of ID, because she wants to start fresh.’

Some of your songs are about dream-like states, others are about relationships.  Some are about personal affirmations. There’s even one about money. What do you like to write about? What are you mostly inspired to write about when you sit down to pen a song?

‘Whatever is on my mind.  I suppose I‘m trying to be the best person I can be, and learn to grow from every experience.  A lot of writing in the past, I came from a place of hurt, but these days, I come from a place of love and understanding. Like, I am observing life happening, and flowing with it as it unfolds. I write a lot with ‘source’ in mind, which is this guidance I am receiving.’

Kind of a spiritual sense?

‘It is beyond me and doesn’t really require a label, except to try to name it. Sometimes the songs just write themselves, which is why I need to quiet my mind a lot, for the sake of my own sanity and in order to be in a place where I can receive.’ 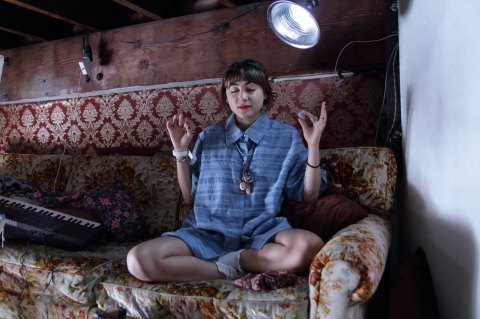 What are some of the things you do outside music that influence your process?

‘Meditation, I do a lot. I write in my notebook every day. I stretch. Laughing a lot and being with funny people and joking or playing around. Movement; I have a lot of energy that I have to move out in order to be calm. Reading inspiring books or watching movies. Sleeping. Spontaneous adventures, skating or bike riding or walking. Being with people I love really influences me. I think everything influences me, but mostly meditation because I need that to function at this point.’

Your music occupies a few different spaces, from electronic pop with an experimental edge through to folk and/or folktronica. Tell us about your production process. Are you producing alone or with collaborators?

‘I’ve been through a lot of phases with my music. I’ve been in various bands and collaborated a lot. My last EP called ‘The Breakthru pt. 1 Sweetsweet’, I produced. I recorded everything with my own basic setup and had some friends play on it. I played some of the instruments as well. That was a little more raw than the album before it. Drums and bass, guitar and synths.

The full album that I self-released in February, called ‘Dreamz Come True and Love is Real’ was done with an awesome producer named Adam Samuel Goldman. That has a polished electro-pop, dance sound. It took a while to make, but I love that album so much and really want more people to hear it. I feel like it deserves that. I was super into this electro-pop, performance 80’s, 90s futuristic style.

For a while, I had a full live band with amazing dancers who had choreographed dances to every song. That was called ‘Barrie and the Starz’, then the live band kind of came apart. I was a bit burnt out after that. I had to start afresh and figure out what I wanted to do, so I just wrote more and worked with what I had (which was myself). I realised that this is a life-long solo project, and I will always collab with other people, but the thread that connects it all is my voice and my song-writing style. Underneath it all, they are just songs that need to come out [of me]. ‘

Do you feel like you’re part of a particular community or scene within LA?

‘No, not really. I’ve noticed that there are a lot of scenes in L.A., but I never really belonged to any particular one. I like to be friends with a lot of different types of people, and find I can connect with a lot of people from various scenes.’

What’s next on the cards for you in terms of tours or releases? Where can we see or hear you play?

‘Well, I want to tour all over the world. I’m sure there will be more releases, because I’m always working on new music. I’ll always post that stuff on Facebook or Instagram or wherever, because I want people to hear it of course!

The next big show is November 5th at The Smell. I’ll play last because I want everyone I booked to get the best spots. Hopefully people will stay around ‘til late to watch me play too. I love playing shows.’